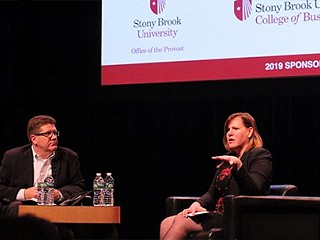 The career of Port Jefferson native and Stony Brook University alumna Dawn Zier has zig-zagged from electrical engineer to senior executive to chief executive at Nutrisystem Inc., where she spearheaded a turnaround, leading to the company s acquisition.

Zier cites her twisting career path that led to unexpected opportunities as a lesson in staying nimble and open to new roles.

"I encourage people not to be wedded [to getting] from point A to B," she said at a forum at the Charles B. Wang Theater at Stony Brook University. "If you re in a job you don t like, leave it. It s important to know not only what you want to do, but what you don t want to do."

Zier spoke before a crowd of executives, academics and students last week as part of The Entrepreneurs Edge series sponsored by the university s College of Business. She was interviewed onstage by Joe Campolo, managing partner of Ronkonkoma-based law firm Campolo, Middleton & McCormick LLP.

Zier earned her bachelor s degree in electrical engineering from Stony Brook and credits the school with teaching her "how to think" by taking problems and breaking them down.

She also has a master s degree in electrical engineering and computer science and an MBA from MIT.

Zier, now president and chief operating officer at Tivity Health Inc., the Nashville, Tennessee, company that acquired Nutrisystem, said she never thought of herself as a leader but learned on the job.

"Leadership is a modeled behavior," said Zier, who said she learned many lessons while rising to become the second-ranking executive at Readers Digest. "I did not grow up thinking I d want to be a CEO."

A management technique used at Readers Digest and transferred to Nutrisystem when she took the top job there in November 2012 was to lean on data analytics.

We put a "fact-based culture" in place that used "data to make decisions," she said.

Zier instituted a system of performance-based financial rewards, cut costs and sought to banish "a culture that accepted losing."

She also moved Fort Washington, Pennsylvania-based Nutrisystem s core message back toward weight loss and away from an image as a gourmet food brand.

The turnaround was so successful that it attracted the attention of a suitor. Tivity Health, a provider of fitness and health-improvement programs, called her in September to explore a merger. On March 8 the $1.3 billion cash and stock deal was closed.

Zier, who also serves as a director at Lake Success-based The Hain Celestial Group, said Tivity Health will have an expanding market as fitness and weight loss programs move toward a personalized DNA body blueprint.

"I believe the future is about personalized nutrition," she said. "It s no longer a vanity play."