First Half 2017 Saw A Decrease in Deal Activity, However U.S. Still Seen As Bastion of Stability Compared to Europe

Merger and acquisition deals in Europe fell sharply in the first half of 2017 while U.S. activity saw a more modest decline. Despite the decrease, the U.S. market is still seen as a bastion of stability compared to Europe. While the European Central Bank continues its program of quantitative easing, the Fed has proceeded with its long-anticipated, albeit modest rate hikes. The Fed’s actions have kept financing incredibly cheap for corporate and financial sponsors, which provides ample capital for M&A deals. 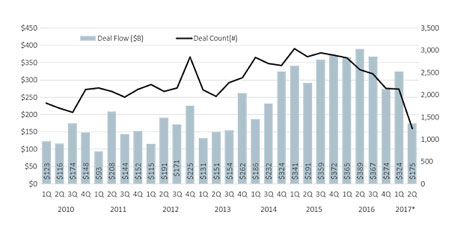 Along with the Fed’s normalization, much speculation about a new infrastructure bill and corporate tax cuts fueled first-quarter M&A activity in the U.S. Since then, the likelihood of such legislation being passed by year-end has diminished, but other market dynamics should encourage plenty of U.S. consolidation in the second half of the year. Most notably, large strategic acquirers continue struggling to create the kind of organic growth that shareholders expect, so growth by acquisition becomes the next-best option.