Newsday: Searching for a Successor 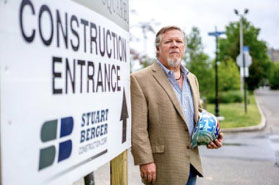 As the owner of the six-employee Stuart Berger Construction Corp. in Lynbrook, Bruce Forster wants to add more people — to score larger projects, build sales volume and ease his own workload.

As part of his wish list, Forster, 56, also seeks a younger version of himself — a versatile professional with business and construction know-how and an engineering or architecture background. This ideal candidate would one day — in about 15 years or so — allow Forster to retire, he said.

Although Forster’s online ads yielded two new hires in 18 months, they didn’t attract the type of young professional who would eventually satisfy his exit strategy. The job applicants were “almost exclusively” people in their 50s, an age when many folks are contemplating retirement, not thinking about owning a company down the road, Forster said.

According to experts, Forster has several options to grow his employee roster and even secure a successor, including offering a referral reward to workers who recommend a new hire, grooming existing employees for top management or purchasing another company.

Richard Strautman, president of Picus Enterprises, a consulting firm in Port Washington, said the odds are against Forster’s hiring an architect or engineer, as such professionals generally beeline it to large firms.

Forster, who received his engineering degree from Polytechnic Institute of New York, now the NYU Tandon School of Engineering, said he was just 29 when he joined Stuart Berger in 1990 with the understanding that he would one day own it. Three years later he took the reins of the now 58-year-old commercial construction firm, whose portfolio encompasses new developments, additions and renovations. Since 2000, Stuart Berger has also been an authorized Butler Builder for pre-engineered metal buildings.

The firm has handled projects ranging from under $100,000 to $7 million, and in the last three years its revenue has jumped 50 percent to more than $9 million last year. Hofstra University and the Metropolitan Transportation Authority are among its customers.

George Andriopoulos, managing director of Launchpad Five One Six, a management-consulting firm in Farmingdale, said it’s not unusual for business owners to want a clone of themselves, but it’s not a realistic goal. For cost-effectiveness and productivity’s sake, he advised promoting from within, cultivating employees over the long term for higher-level positions or divvy ing up the owners’ responsibilities among a few people.

“Where people don’t have the experience or skill set — like architecture — it’s OK to look outside of the company to recruit after exhausting internal possibilities,” he said.

Although Forster provides training to his workers and believes some would be interested in ownership, he said their current duties, which are mostly in the field and involve job safety and some project estimating and purchasing, prevent them from assuming additional responsibilities. In addition, they don’t possess the business management experience, including marketing and finance, that is critical to the firm’s growth, he said.

“I’ve got great people here,” noted Forster, “but there’s not one person who can take over, because the business has become complicated,” with all the safety, insurance and planning required, as well as the reams of documents to complete. He also said his employees are team players who would recommend a potential employee without a financial inducement to do so.

Another option, said Andriopoulos, is to acquire a construction company with the necessary contracts, connections and human capital for growth. “It can be more cost-effective than building a business,” he said.

Forster concurs, and about a year ago he turned to Protegrity Advisors, a mergers and acquisitions firm in Ronkonkoma, to begin the search for a Long Island construction company with the additional manpower to help him achieve his diverse goals.

Although some experts said such a course of action carries the risk that key people will quit after the acquisition, Protegrity CEO Gregg B. Schor countered that “stay bonuses,” increased compensation or equity or stock options in the new entity can help to retain these employees.

“There could be a brighter future for them in a combined entity,” Schor said, noting that the larger enterprise could provide more room for professional growth and mobility within the organization.

For Forster an acquisition has an added bonus.

“It will allow me to go fishing,” he said.